Freestyle Football: sports legend Marcel Gurk will be a guest for the first time at Forte Village

For some, a vacation is the synonym of relaxing and tranquillity, meanwhile, for others, it represents an occasion to practice their favourite sport and discover new ones like freestyle football.

Freestyle football unites the art of acrobatic dribbling with adequate physical preparation, creativity and imagination. This sport is a mixture of football techniques with dancing and circus abilities with a touch of athletic capacities usual in gymnastics.

It’s played with a ball and is performed with acrobatics using the entire body except for the hands.

The freestylers execute a combo of evolutions during a match, meaning a sequence of technical gestures called tricks by using head, legs, chest, neck and back. The tricks can be made in an erect, sitting down or lying down position.

Over the years the performer’s imagination has given way to a series of spectacular combinations and it has become necessary to make an order of the various tricks by grouping them into four main subclasses:

The lower body moves: are among the most difficult tricks and can be made in a standing up position using the lower part of the body (feet, legs, knees and heel).

Upper body moves: is a series of tricks made mostly in a standing position and some times sitting. It’s a style in which one can use the higher part of the body (head, neck, shoulders, chest and back) and balance is key.

Sit-down moves: often abbreviated as “Sit”, are tricks performed either sitting down or lying down with the entire body.

Ground moves: are tricks made with the ball on the ground in constant contact with the floor. It’s an “Individual Technique” fundamental in one against one matches in “Street Soccer”.

Among the best known and most appreciated styles which have taken form during the past years there are:

The first match in Italy took place in Rome in 2008 and was won by Domenico Grasso known as DomyBD, and who represented Italy during the first RedBull world championships in San Paulo Brazil. Two years later the Italian brand of sports footwear and clothes Lotto Sport Italia organised a match so to create visibility for their new Zhero Gravity Ultra shoes.

Later in 2012 until 2014, RedBull organised more tournaments firstly in Pavia, then Bologna Fiere and Brescia. The Intralot “Crazy Freestyle Challenge” took place in 2016, the “Winterball” in Brescia in 2017, a new RedBull tournament in 2018 and the Italian IFFC in 2019 took place in the shopping mall of Porto Allegro in Montesilvano, Province of Pescara.

The most important competition of freestyle soccer is the Super Ball which takes place every year in Czech Republic organized by WFFA (World Freestyle Football Association), the tournament unites the best freestylers, men and women from all over the world and is made up of various challenges:

Style, originality, workout and willpower are the key to success in freestyle football, to know more about the techniques and become an excellent freestyler Forte Village invites you to practise this discipline in its Freestyle Football Academy with the exceptional trainer and German champion Marcel Gurk.

Freestyle football is a sport which makes use of the entire body, improves balance and agility, stimulates concentration and empowers sequential memory.

The multi-prized resort Forte Village surrounded by the splendid Sardinian sea welcomes everyone to their Freestyle Football Academy with special trainer Marcel Gurk in the occasion of the European soccer championship 2020/2021.

Marcel Gurk is a young champion of just 23 years old and is one of the leading world champions of freestyle soccer also holding a Guinness World Record. “I can’t imagine life without a ball”, it says in Gurk’s biography, alongside being a pioneer of the discipline he also studied sport, events and media management in Düsseldorf.

He’s considered one of the best German freestyle soccer players, his talent and extroverted and nice character allowed him to quickly conquer many fans. Gurk collaborates with many brands and participates at seminars and freestyle schools all over the world, teaching his pupils of various age groups the best tricks for them to become true professionals of this sport.

It will be possible to train with Marcel Gurk at Forte Village Resort from the 17th to the 21st of August 2020 and discover all the incredible acrobatics one can do with a simple soccer ball.

Forte Village is truly a sports resort and now freestyle soccer has been added to the wide offer of sports activities available for you to choose from and have a unique and unforgettable vacation. Football, fencing, chess and water sport, also rugby, dancing, tennis, boxing and many more.

Would you like to learn the rules and secrets of freestyle football, meet Marcel Gurk and have a dreamlike vacation in a true paradise? Discover Forte Village Resort. 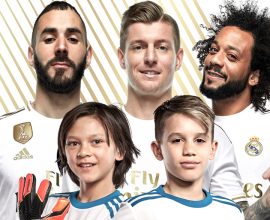